It’s not often you see a police officer cry in uniform, but it was a true and honest reaction from Seattle Police Sgt. Adrian Diaz.  This, after Baldwin showed up at a youth football practice in Renton, surprising Diaz with the ‘NFL Hispanic Heritage Leadership Award’ for his work with kids.

Q13 News cameras were there to capture the moment. 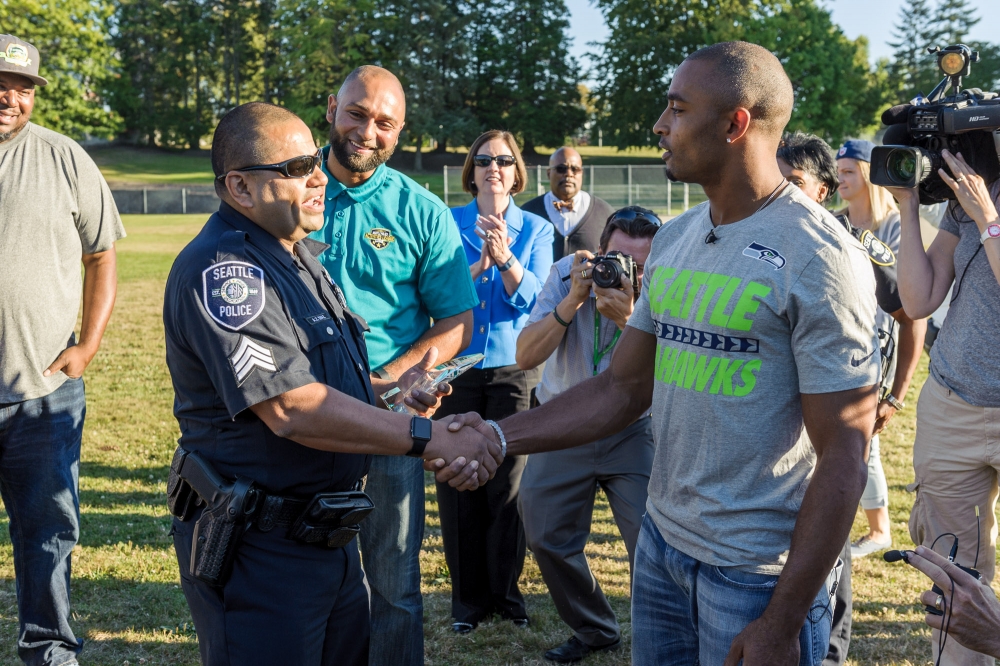 Diaz has created dozens of programs that help officers and young people connect and communicate.

“I mean, obviously, it makes me feel good,” says Diaz.

Thanking him for all his work and shaking his hand, Baldwin congratulated Diaz, who was overcome with emotion.

“To think that Doug Baldwin came out here to acknowledge him, I think that’s a wonderful symbol of unity. Here in Seattle we want to work with our community, not apart from our community, and build bridges,” says O’Toole.

Much like the bridge the Seattle Seahawks created before Sunday’s game.

Led by Baldwin, the entire team linked arms in a symbol of unity.  And Tuesday, another symbol, as SPD tweeted out a photo of Baldwin and O’toole talking together just before the big surprise.

“We kind of set the perimeters of what we want to do. I reached out to the people who can help us make that happen.  So, soon, we’re just going to sit down and have a discussion,” says Baldwin.

It’s a discussion many say they support.

“Over the last several months, the discussions, we’ve had a lot of divide. Whether a community is divided by the police or the police are divided by the community; it is so important that we integrate into our communities; that we become a part of it,” says Diaz.

“I’m hoping here in Seattle we can be an example to other communities, that we are working together in unity, to try to build bridges and repair trust,” said O’Toole.