SEATTLE -- Imagine the trauma of being a crime victim. Then imagine being asked to tell a detective the most intimate details of the attack. And all this conversation takes place in a stark interrogation room where moments earlier a homicide suspect sat.

But now victims of sexual assault will get to talk about the details of the crime in a different sort of room. 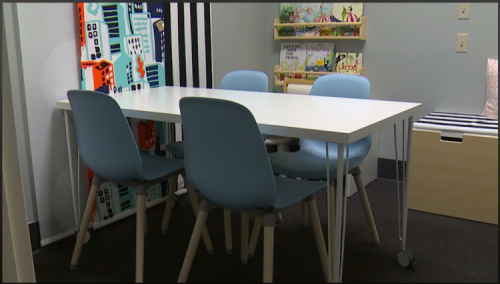 "When you're interviewing people that have been victims of domestic violence, victims of sexual assault, you really need to make them comfortable to allow them to tell the story of what's happened to them," said Seattle police Capt. Deanna Nollette.

The Seattle Police Foundation was partners with IKEA on the project. Getting a comfortable place for victims was crucial. But finding a tranquil place for children was the key.

"Sometimes the kids don't even know what's going on," said Dana Lockhart, program manager for SPD's victim support team . "They think they're coming downtown to go to an appointment."

Until now, police have had kids camp out in hallways, even in the lobby. Meanwhile, their moms were interviewed in private.

IKEA designers spent all day Monday and part of Tuesday on the renovations. IKEA said it donated about $2,000 in labor, materials, furniture and toys.