The Foundation stepped in to lead an intensive fundraising campaign to “Save Our Horses”, and provided funds to maintain the horses beginning in 2009, and through 2014. Without this critical support, the Mounted Patrol Unit would have been eliminated; Seattle would have forever lost a very valuable crime fighting and community strengthening resource.

In 2013, SPD's Mounted Unit, ended their roll in crowd control and is now official part of the Community Outreach Team.

Citizens who may not normally interact with police will do so with a police officer on a horse. Horses are ambassadors of goodwill and are highly approachable since so many people love animals and are curious about the horses. The Mounted Patrol makes public appearances all year, including school tours, scout troop visits, and annual Picnic in the Precincts. 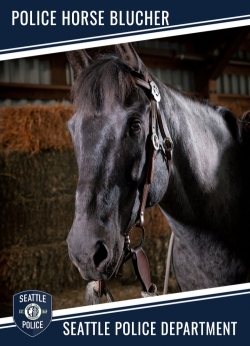 PH Blucher has chosen Officer Kagelmacher to be his partner.  He is very particular about who rides him.  This is due to his long and established "Hancock" bloodline.  The bloodline was established in 1923 and is known for its build, stamina, and intelligence.  He loves show tunes and massages; he is often seen rubbing his own back, stomping his foot, and vocalizing to "Yorktown (The World Turned Upside Down)" from his favorite musical, Hamilton. 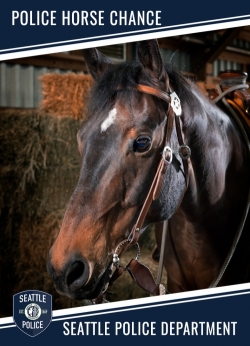 PH Chance was born with a club foot, but you would never know it.  He has always had a 'can do' attitude and never let his disability hold him back from accomplishing his dreams.  He likes to be called by his formal name 'Sir Chance-alot.' 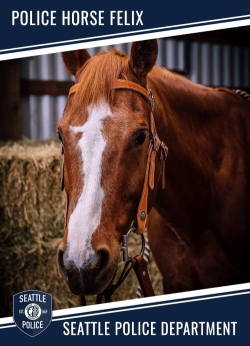 PH Felix started life in Austin, TX.  He dreamed of moving to the Pacific Northwest and his lifelong friend Lil' "Buzz" Sebastian, migrated to Olympia to pursue their careers in cutting.  There was only one 'rub': he's afraid of cows.  Felix is now finding his stride with the Seattle Police Department Mounted Patrol Unit.  He enjoys his new job roaming Seattle's urban streets, finding new friends and is falling in love with the Emerald City. 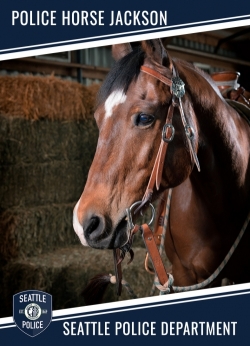 PH Jackson has been taking Mounted Patrol Officer Chase through the steep learning curve of negotiating the downtown corridor via horseback.  Jackson says there is "no terrain too rough, no job too tough."  He loves his friends in the SPD K9 Unit and all of the kids that say hi to him while he's working. 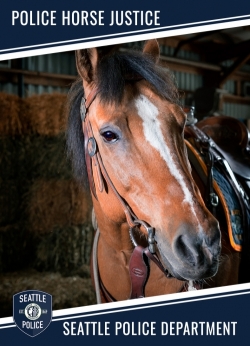 PH Justice prides himself as being the tallest horse in the barn by at least .1 hands!  He is known to have a split personality since he's a registered Paint but has the markings like a Dunn.  Justice has ponied the new string downtown and is currently the senior officer at the barn.  He spent last summer in Montana with his stablemate Blucher.  He has an uncanny love for possums! 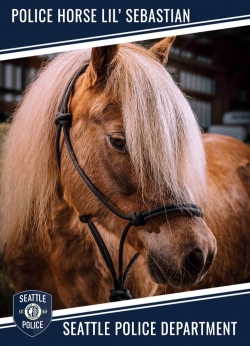 Lil' Sebastian was named by Miss Nuutinen's 5th grade class at Adams Elementary School in Ballard.  His best and closest friend is PH Felix gave him the nickname "Buzz" because of the sound he makes when he whinnies. He followed Felix into public service but always had a dream of being a member of the Mounted Patrol himself.  Lil' Sebastian has an honorary degree from the University of Nebraska.