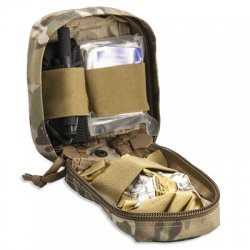 Being shot is a very real possibility for every patrol officer, and even simple calls can turn deadly with little warning. Throughout the country, police officers learn basic first aid in the police academy and most police departments provide annual training in CPR. Beyond that, most police officers don’t receive lifesaving medical training, the thought being that fire and medics are only a few minutes away.

However, on February 28, 1997, it became clear that basic lifesaving training and critical care supplies could be crucial to saving an officers life. On this day, two heavily armed men robbed the North Hollywood branch of Bank of America. During the next half hour, hundreds of rounds were fired and multiple officers were shot. During the incident, officers who were hit were largely without help. Due to continuing gunfire from the suspects, EMS and fire rescue were not able to get to the wounded officers. A wounded person can bleed to death in just a few minutes, yet paramedics could not treat the wounded officers for half an hour or more.

In 2012, officers from SPD’s Advanced Training Unit began the process of improving the training of its officers in the management and treatment of the leading cause of preventable police officer deaths - severe hemorrhaging from a penetrating injury.  While SPD had the means to provide this critical training, known as “Care Under Fire”, there was no available funding to purchase the proper equipment officers needed to care for themselves or a fellow officer immediately following a gunshot wound or other penetrating injury.

Through the Seattle Police Foundation’s annual grant process, the officers were able to apply for a grant. They received $4,500 to purchase trauma kits to outfit the officers most likely to respond to armed attacks, rifle patrol and shotgun patrol officers. The Care Under Fire trauma kits are lightweight and wearable, so they are quickly accessible. Each kit provides officers the ability to treat severe hemorrhaging in an emergency situation, and potentially save their own life or the life of a fellow officer.