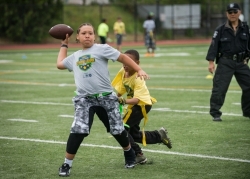 Seattle Police Activities League (SeaPAL) is a proactive, prevention-oriented strategy which relies on the cooperation, coordination and building of relationships between youth, police and community through recreation and cultural enrichment. SeaPAL focuses on providing youth 5-18 years of age the opportunity to be a part of a variety of programming activities with police officers serving as coaches, mentors and role models.

- To create a safe and healthy environment indicated by increased participation and reduction in crime around the   communities;

- To give youth alternatives to conflict resolution through participation in programs;

- To build character and develop leadership excellence among our youth;

- To train, promote and build strong minds through Athletics and Community stewardship – A mentorship model.

The efforts cultivate and support communities to carry out crime prevention strategies and integrate the concept of community policing across the City of Seattle.

During the summer of 2015, the Seattle Police Department employed youth to develop an understanding of what youth wanted from their police department. The youth set up different focus groups with other youth asking questions about the police department. The youth acquired a variety of information to develop three basic priorities; Education, Youth Dialogue and Youth Engagement. After listening to the youth the Seattle Police Department understood the need to create SeaPAL.

SeaPAL is integrated into the Seattle Police Department Youth Outreach and Violence Prevention Unit. This created another avenue to be invested in the growth of young people in the City of Seattle. SeaPAL and the Seattle Police Department has begun to leverage existing partnership with local community based organizations and other city departments to provide the programming into our local micro communities. The initial activities for SeaPAL include Flag Football, Basketball, Soccer, Youth Police academies, and a Mountain Bicycle Program.

Thank you to 7-Eleven and your 28 Franchisees for the initial funding of over $10,000 to launch SeaPAL in the summer of 2016 through the Project A-Game Grant!